Matt (full first name Matthew, sometimes nicknamed "Matty", called Mr. DeMatt in "Balancing Act") is one of the three main protagonists of Cyberchase, and one of the four main members of the CyberSquad alongside Inez, Jackie, and Digit.

He is an 11-year-old Caucasian boy who lives on a family farm on Earth, and is interested in sports and Greek mythology.[3] He wears a backpack full of helpful objects into Cyberspace.

Matt is usually voiced by Jacqueline Pillon, and occasionally by Karen Goora.

Matt aspires to be a home run leader and has a deep interest in Greek mythology[4], which proves especially helpful on the cybersite Mount Olympus[5]. Other sports-related interests include riding his skateboard, playing baseball, and rock climbing, according to Cyberchase Online[citation needed].

Matt's pet peeve is waiting, and he is thus prone to making impulsive decisions. Playing with his yo-yo helps him think through problems.

Matt may have some interest in geology, as he mentions in "Crystal Clear" that he and his mother once grew a salt crystal.

In "Clock Like an Egyptian", Matt is shown wearing a watch.

In "A Recipe For Chaos" and "Plantasaurus!", Matt is shown wearing his green pajamas.

Matt and Digit are close friends. With Digit, Matt can be able to use tools when he needs to when he is in situations, just like Jackie & Inez would[citation needed].

Matt and Inez are close friends, and Inez treats him protectively[7]. Matt often teases Inez by calling her "Nezzie", to her chagrin, and she sometimes reciprocates by calling him "Matthew". He treats her like a sister/very close friend

Matt and Jackie are close friends. However, he often teases her by calling her a drama queen[8], and she seems to take his teasing more personally than Inez does. The Crab Prince has suggested that Matt only teases Jackie because he likes her.[9]

Matt is jealous of Slider because Inez and Jackie usually pay more attention to him. However, he seems to have forgiven Slider, as they haven't argued since "Team Spirit".

Matt and Shari Spotter seem to have crushes on each other, making Inez and Jackie jealous[10]. He is not as close to her as he is with the girls and is for the most part oblivious to the fact that she likes him.

11 years old: He's a Cyber-detective with a yo-yo, a backpack full of gadgets and a knack for uncovering clues

Favorite Music: Anything by Will Smith

Pet Peeves: Waiting (for anything)

Favorite Line: "OK, what do we know?"

Pet Peeves: Waiting [for anything!]

Matt leaps first and asks questions later – literally! He’s a true friend, with bravery and brains to spare. Matt is always ready to jump in and explore, so sometimes the girls and Digit have to hold him back. He’s an observer and collector. He might find something along the way and stuff it into his backpack – he never knows when he might just find a use for it.

When he’s got a problem to solve, Matt just wants to get his hands on it and figure it out. Or play with his yo-yo till he gets an idea. Matt is a bottom-liner, and usually speaks his mind. He doesn’t need to preface things he says – he just gets to the heart of the matter.

Matt is crazy for jokes and puns. He’s totally into all the cool stuff he gets to do in cyberspace, like racing around in cybercoupes and exploring unusual places. His favorite cybersite is Radopolis, because they have the best skatepark in the virtual universe.

BACKGROUND An 11 year old caucasion, he lives on a farm

SKILLS He loves to skateboard, and is willing to try any and all daring and extreme games. He can drive a tractor (or just about anything else), ride a horse, milk a cow, and fix anything! He’s a good improviser and great at telling jokes.

Matt, age 11, lives on a farm when he’s not in cyberspace. He loves to run and skateboard, is curious and jumps into things before thinking, often making mistakes. When he does think ahead, he plays with his yoyo. He loves to tease his friends. Signature line: “Touchdown!” 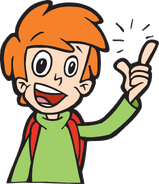 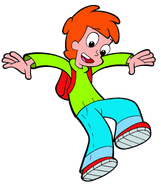 In the Brazilian dub, Matt is named Matheus.