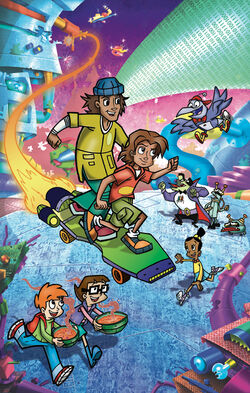 Original air date
July 28, 2005
Directed by
Larry Jacobs
Written by
Ronnie Krauss
George Arthur Bloom
Kristin Laskas Martin
Topic
Cooking measures
Previous
"Past Perfect Prediction"
Next
"A Change of Art"
“Now I have the NIC and your son. Welcome to your worst nightmare, my old friend.”
―Hacker, to Coop

"Measure For Measure" is the fifth episode of Season 4 of Cyberchase. It originally aired on July 28, 2005.

It is the fourth and final episode of the Hacker's Transformatron mini-series.

The episode's title is a reference to Measure for Measure, a play by William Shakespeare.

Hacker’s mysterious machine is finally revealed – “The Transformatron” can change anyone into anything!  He learns the kids have the Network Interface Card – the final piece he needs.  But the kids have also found a map that leads them to Coop, Slider’s long lost father. They are shocked to discover Coop has been a victim of magnetite. Before they can measure out the antidote, Hacker grabs the “NIC” – and Slider!  Will the CyberSquad be able to rescue Slider? Can they cure Coop? And how will they stop Hacker from taking over Cyberspace with his dastardly device?

Slider reunites with his father. His father now returns after the magnetite he got was gone.

When I learned that Hacker plan to use. Just Wait, I'll be back. 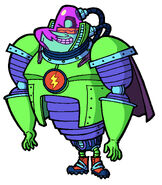