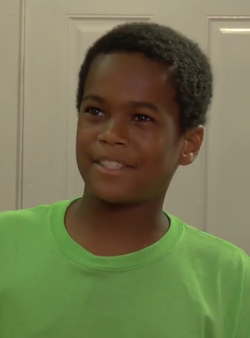 Mekhi is the deuteragonist of the For Real segment "Harry Vegges Out" He is a preteen boy who lives with his father.

In the segment, he is recognized by Harry after having gotten older. He offers to help Harry make lunch, but he declines, and shows him his macaroni and cheese recipe, making messes in the process, much to Mekhi's dismay.

Due to juggling in the kitchen despite his timer going off, Harry's macaroni and cheese burns to a crisp, much to Harry's dismay. Mekhi tells him it's not healthy anyway (as it has dairy from milk and, of course, cheese, and grains from, of course, macaroni, and fat [which is from a group that is not a food group] from butter, but does not contain proteins or produce), and suggests a healthier meal. Mekhi shows him a nutrition chart (whose dairy section is a small, separate circle, while all of the other food groups are inexact quarters of a bigger one), and tells him what is in his idea of a meal: a frittata with toast. He reveals that like Harry, Mekhi used to not be a fan of produce, but upon trying some, he found some he really liked, and plans to change Harry's mind.

Mekhi sets up asparagus and spinach for vegetables and, to Harry's questioning, cherry tomatoes for fruit (as they have seeds inside). There are also onions for flavoring, eggs for proteins, shredded, white cheddar cheese for dairy, and, on the side, bread for the toast.

Harry and Mekhi prepare the meal together, much to Harry's tears when he is cutting up the onion. Eventually, Harry puts it in the oven. When it's out, Harry hesitates, but tries a bite of his frittata, and admits he liked it. Mekhi pats his back saying he has really grown up.

Retrieved from "https://cyberchase.fandom.com/wiki/Mekhi?oldid=24630"
Community content is available under CC-BY-SA unless otherwise noted.