Melvin is Merlin's brother. He debuts in the episode, "Harriet Hippo and the Mean Green".

Melvin has golden brown skin with bags under his eyes, light blue eyebrows, and long mustache. He wears an orange hat with a yellow accent in the middle, an olive green robe with dark turquoise trim, purple pants, and brown curled shoes.

Merlin is shown to be intimidating at time, but he has a whimsical friendly demeanor. He has a slight stutter. Despite having good intentions, his clumsiness can interfere in helping. In the episode, "Harriet Hippo and the Mean Green", he had an antidote for Motherboard's affliction of the Mean Green, but he accidentally tripped over a gold ladle on the ground and the container with the potion shattered. 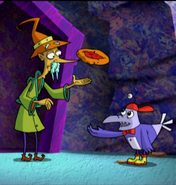 Melvin offering Digit a Danish pastry
Add a photo to this gallery
Retrieved from "https://cyberchase.fandom.com/wiki/Melvin?oldid=21409"
Community content is available under CC-BY-SA unless otherwise noted.