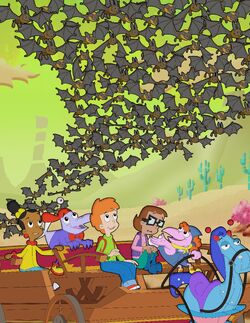 "Missing Bats in Sensible Flats" is the fifth episode of Season 12 of Cyberchase. It originally aired on April 17, 2020, the date of Bat Appreciation Day[1].

Digit’s cousin, Brigit, is in a prickly bind. Although her garden is overflowing with flowering cactus plants, they’re not bearing any apple cactus fruit. And no cactus apple fruit means no cactus apple juice –everyone’s favorite drink in all of Cyberspace! Brigit thinks she knows what’s going on, thanks to a chart she’s kept of how many bats – or in this case, how few – have come to pollinate the cactus flowers so far. Where have all the bats gone? Could it have something to do with Hacker’s new secret hideout? With a map to guide the way, Digit, Matt, Jackie, and Inez set out into the desert to find out.[2]

A game called "Echo Explorers" (the last game on Cyberchase Online) is based on this episode.