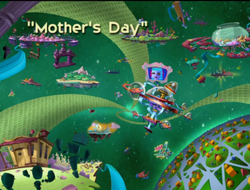 Mother's Day is the sixth episode of the second season of Cyberchase. It originally aired on May 7, 2003.

It’s Mother’s Day in Cyberspace — and Hacker is determined to ruin it for everyone, especially Motherboard, by derailing the train that picks up the rare and colorful Madre Bonitas. This beautiful flower symbolizes Mother’s Day, and it must be harvested on this one day only. It’s a race against time, as the kids and Digit try to repair the breaks in the line and save Mother’s Day.

Hacker is about to release the bugs