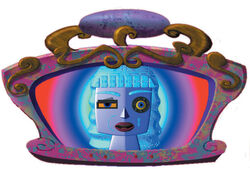 Motherboard (sometimes "Mother-B") is the benevolent ruler and protector of all of Cyberspace. She exists as the brain[3][1] of Motherboard Control Central and watches over each cybersite[4]. Dr. Marbles and Digit are her technicians, as was Hacker prior to double-crossing her.

Motherboard is wise and powerful, described as "a warehouse of every idea from the beginning of time"[5], but Hacker's virus has weakened her. She calls on Inez, Jackie, and Matt to help defeat villains such as Hacker and protect Cyberspace.[1] Her main role in Cyberchase is to give the CyberSquad missions and advice. Due to the virus, she is often interrupted by bursts of static and other malfunctions. Inez suspects that the virus is also what causes Motherboard to talk in riddles[6], which sometimes causes confusion when she instructs the CyberSquad.

In "Lost My Marbles", Buzz refers to Motherboard as "that cyberbrain who runs [Cyberspace]". Motherboard may be the only known being of this kind, or at least the only "cyberbrain" specialized to run Cyberspace.

Similar entities may include the 3D-rendered likeness of Hacker that replaces Motherboard in "The Snelfu Snafu" and "The Flying Parallinis", the duplicate of Motherboard's circuit board in "Step By Step", and The Hackerboard control panel in "Soil Turmoil".

Motherboard appears as an "electronically-generated image"[5] of a 3D-animated periwinkle head and neck, and is almost always seen on a computer screen or another flat surface that acts as such. She has wavy light blue hair and eyebrows with the texture of circuitry. In the same shade, she has a curved light blue line on her right cheek that resembles a nasolabial fold, while her left cheek has the serial number[7] "M57383" embossed vertically. Motherboard's left eye is a yellow sphere with a light blue pupil, and her right eye is an orange rectangle. While her pupils differ in color, both of her irises are blue. Her nose is an oblique quadrilateral pyramid. She has dark red lips.

When Motherboard is viewed from the side, her facial features are shown to be detached from her head by a significant distance, allowing the backs of her eyebrows, eyes, nose, and mouth to be seen. The geometry serving as her nasolabial folds is much closer to the front of her head than the other features, albeit also detached.[8][9]

In the original pilot demo for Cyberchase, an early version of "The Poddleville Case", Motherboard's design is much more abstract. She is two floating eyes with blue sclera and green irises, and a sine wave representing her mouth.[10] This design was replaced by the final series premiere.

In Season 1, Motherboard faces forward and rarely, if ever, rotates. However, she appears to use the same 3D model as in later seasons. For instance, when her left eye jumps away from her face in "Cool It", it seems to change perspective and foreshorten with distance.

Motherboard is sometimes depicted with a drop shadow against her background.

From Season 2 onwards, Motherboard often turns her head and is viewed from other angles, making it apparent that she is 3D modeled. Her model also seems to look much smaller than it was in Season 1, with her head becoming much squarer. and she becomes more expressive.

Spell of the Mean Green

In "The Fairy Borg Father", Motherboard is transformed into a bunny when Zanko grants one of Delete's wishes. She has a pale green-blue muzzle and rabbit ears, an ellipsoidal black nose, whiskers matching her hair color, and two buck teeth.

Motherboard's appearance was updated in Season 6. Some of her edges appear rounder, and she is lit more brightly. Her full model is much more often animated with squash and stretch.

In the scene of "The Cyberchase Movie" where Hacker imagines reformatting Cyberspace, Motherboard has the color palette of Hacker's body, with green skin and black hair. The colors of her background are green and purple. Finally, her eyes glow green. Her lips appear unchanged.

While Motherboard's design has not changed in Season 13, she appears to be rendered under much dimmer lighting.

When Motherboard is sleeping or shut down, it affects her image in various ways depending on the episode.

In "Lost My Marbles" and "Sensible Flats", where she shuts down and enters sleep mode due to weakness, respectively, she merely appears to fall asleep without her monitor turning off. Her background also turns green.

The screen does go black when Hacker turns her off in "On the Line".

In "The Snelfu Snafu: Part 1", when Motherboard's circuits are failing and she must power down into emergency standby mode, her monitor displays a blue screen with the error code 100607. The monitor seems to be able to receive and play video feeds while she is in this mode.

Motherboard's components include her CPU and operating circuits[11], the Encryptor Chip, the Memory Integrator which helps store her memory and keep Control Central running[12], and an unnamed panel that controls the portal system[13].

Motherboard has a coolant tank that stores cryoxide to prevent her from overheating[14], which can process other liquids such as antidotes[8]. She has a paper tape printer[15] and a laser printer that can shoot laser beams[14].

Hacker claims that a Digitizing Activator could scan a rod-based triangle to cure the virus. Although this turns out to be a lie, Motherboard did not dispute it, so the Digitizing Activator may be a real component that scans geometric figures or other objects for authentication or data encoding purposes.[16]

Motherboard is also equipped with memory shields, which seem to prevent her from breaking down[17].

Motherboard is demonstrated to be wise, selfless, and caring, earning the trust of the citizens of Cyberspace. She appreciates the CyberSquad's work. She has a good sense of humor[5] and sometimes quips at the ends of their missions. "Mother's Day" portrays her as motherly to Digit, Widget, the CyberSquad, and Cyberspace as a whole.

Motherboard believes in peace and harmony[18]. She enjoys beauty and is implied to see it in various things, rather than practicing favoritism. She dislikes dishonesty[16].[19]

Motherboard's political philosophy involves a deep belief in a free and open cybersociety[16], which may be based on free and open-source software. She later states that her "main concern is to keep Cyberspace safe for all law-abiding cybercitizens."[12]

Despite her optimism, Motherboard is wise to Hacker's ways[5], and generally willing to show an assertive side to those she has reason to distrust. In "Trick or Treat", she tells Hacker that he is not welcome in Control Central, and orders the CyberSquad to detain him upon his suspicious offer to remove her virus. Motherboard also seems indignant in "The Case of the Missing Memory" when Wicked remarks on her "weakened state" as a bargaining chip; she interrupts Wicked to contend that she is strong enough to guard Cyberspace.

In a similar but less severe vein, Motherboard tells Digit "Get a grip!" when he starts rambling in "A Change of Art".

Motherboard can generate portals to bridge physically distant locations in Cyberspace and the real world alike. Motherboard can even appear physically within the vortex, at a size that dwarfs the Grim Wreaker[9].

Motherboard can generate or summon certain objects, such as the Skwak Pads[1] and snow clothes[20].

When Hacker removed Motherboard's Encryptor Chip, Digit put it back in, and Motherboard and Dr. Marbles rejected Hacker from Control Central. Despite the kickout, Hacker took Digit with him, and when they landed at the Northern Frontier, Hacker made him build a ship, along with Buzz and Delete. Then, Digit escaped to go back to Motherboard's side.

Shortly after his rebuild, Hacker launched a plan to get back at Motherboard. He programmed a library computer in the real world to crash, which would allow him to breach the system. He attacked while Motherboard was undergoing a upgrade. At that time, Jackie, Matt, and Inez were at the computer. After touching three dots, they crashed the computer, allowing Hacker to breach the system. Motherboard was able to warn the Doctor of the breach. Doctor Marbles attempted to reload the firewall (which had been off the entire upgrade), but the virus Hacker launched reached the computer before the entire firewall was loaded. Luckily, the firewall was up before the virus fully infected her, giving Motherboard only partial damage.

One effect of the virus that remains is that Motherboard sometimes flickers and squelches with static, which at times becomes so severe it cuts off her sentences.

Hacker describes the infected Motherboard as "but a mere fraction of her once-powerful self"[21].

The wise and powerful ruler of cyberspace. Her circuits are a bit scrambled because Hacker double-crossed her and transmitted a computer virus into her system.

Favorite Color: I find beauty in all colors

Favorite Color: She loves them all

Great At: Knowledge and wisdom

The kind and caring ruler of Cyberspace. She keeps the virtual universe running smoothly and makes sure everyone is taken care of.

FAVORITE COLOR She finds beauty in all colors.

Motherboard is the benevolent ruler of cyberspace – the heart, soul, energy and brain of the giant computer system. But she just hasn’t been herself since Hacker unleashed a mega-virus that devastated her circuitry. Motherboard is the engine and source of information – a warehouse of every idea from the beginning of time – but because Hacker zapped her operating system, she’s running with more than a few glitches and bugs.

Motherboard radiates goodness, warmth and peace, and appreciates the hard work done by Matt, Jackie and Inez, who she calls “CyberMates.” She has a good sense of humor, too, and is very wise, especially to Hacker’s ways.

Home base is Control Central – a vast, hi-tech computer center. She often appears as an electronically-generated image on a computer screen. Even in her weakened state, Motherboard stores all the data of and hosts unique sites across the virtual universe. When Motherboard speaks, it may sound like she’s on a bad mobile phone connection, but cybercitizens know they can always count on her.

Motherboard, the wise ruler of cyberspace, speaks from a computer at Control Central. Hacker has infected her operating system with a virus, so we often hear static as she tells the kids and Digit about important missions to stop Hacker. Signature line: “Hacker alert!”

A motherboard is the main printed circuit board in a computer, which the other parts are connected to. 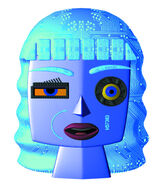 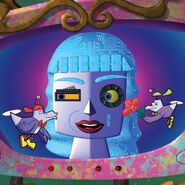 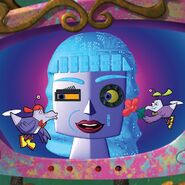 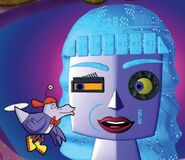