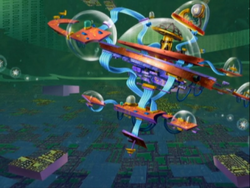 Though Control Central can be flown like a spaceship, it usually resides at the center of known Cyberspace[9].

The control room contains the main screen that Motherboard is seen on. The camera sometimes cuts to this screen when she is talking, even when characters are communicating with her through another screen.

Control Central's defenses include shielding and firewall capabilities that prevent malware from infiltrating its circuits, although these must be inoperative during systems checks[7]; and power locks[10] a defensive force field[11], and a spring-loaded "rejector ejector" launch panel[12] to keep intruders out.

The control room is the main room shown in the series. It features a raised walkway to Motherboard's control panel, with doors leading to other rooms on the level below.

Depending on the episode, the back of the control room sometimes yields direct access outside. There is a small platform on the same level as the control room's walkway. The rejector ejector is installed under one of the large panels making up the floor.

In "Mother's Day", a room that appears to be a combined kitchen and dining room appears. It has installations such as a refrigerator, cabinets, a sink, a table with two chairs, and a corded telephone. Widget breaks and overflows the sink in the episode.

There is a garden with climate control that is new as of "Trick or Treat". It seems to be accessed from a room behind the control room's back door. Motherboard's operating circuits, a labyrinth with at least four sectors, are also accessed in this episode.

Dr. Marbles uses a room to store spare parts. The CyberSquad searches it in "The Case of the Missing Memory". At the time, it is disorganized, with various unlabeled boxes, although Digit had been intending to clean the room up. There are multiple hallways on the way back to this room. A door that gets blocked in the episode serves as a choke point, being the only way back to the control room.

In "A Broom of One's Own", an unnamed hallway and room are shown that lead to the Motherboard Override Switch.

A room with many shelves is shown in "Fit To Be Heroes" that contains the complete history of Cyberspace.

Control Central is redecorated as of "Plantasaurus!", which introduces several new rooms.

The library has a section on the history of the CyberSquad, documenting all of their adventures and including holographic illustrations.

Digit and Motherboard designed the new kitchen, which he uses to cook.

There is also a dance studio, with 10 by 30 tiles of flooring, which is estimated to be half the control room's size.

Digit's room is decorated to his tastes, but is the smallest room in Control Central at 10 by 10 floor tiles.

In the Cyberchase: The Quest games, Control Central includes a room for the player. They can decorate it by purchasing items.

Top-down view of Motherboard Control Central in "Lost My Marbles"

The control room darkened in "Lost My Marbles"