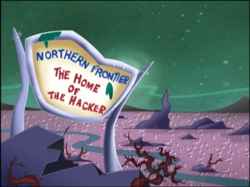 The Northern Frontier is a cybersite in the far north of Cyberspace, where Hacker was banished to and now lives. The sun is eclipsed from its surface.

The Northern Frontier was originally characterized as a cold, barren wasteland, comprised of desert, dead trees, and one river connected to a waterfall[2].

The cybersite is home to some very windy locations. As a result, sports such as windsurfing and kite-boarding are practiced there.[2]

Later seasons established various thriving biomes within the Northern Frontier, including a forest covering a third of the site[3][1], prairieland, meadow, and marsh alongside the bare ground and frozen areas[4].

The sign for the Northern Frontier, often used in establishing shots

Inez in the Dunes