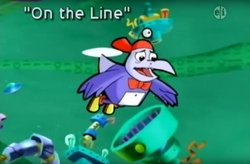 On the Line is the ninth episode of the fifth season of Cyberchase. It originally aired on April 19, 2007.

When Digit heads off alone to dispose of the powerful Network Interface Card (NIC), calamity strikes. A sinister cyvulture steals the NIC right out from under Digit’s beak and gives it to Hacker!  At a secret location on the Northern Frontier, Hacker uses the NIC to power up his dastardly Transformatron and transforms himself so he can slip into Control Central and replace Motherboard. To find the Transformatron and reverse its power, the CyberSquad must discover how an object can be pinpointed using two straight lines - before Hacker takes over Cyberspace forever!

Digit: "Then walked straight to the machine." Motherboard: "Did you zigzag or wander around?"

Digit: "Nope, I walked in a straight line all the way,"

Digit: "Where there is no line?"

Digit uses his lazer pointer on his Skwak....

Digit: "Only one straight line between two points,"

Digit: "And there is the NIC."