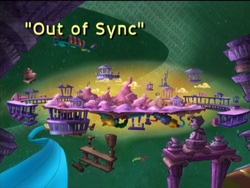 "Out of Sync" is the 26th and final episode of the first season of Cyberchase. It originally aired on July 10, 2002.

The balance and harmony of Mount Olympus is controlled and protected by the music of The Spheres. When Hacker disrupts this balance and throws the site into utter chaos, the Cybersquad has until sunset to make the sound of the music right! For the beat to go on, the kids must recreate the music and find the missing element in the musical pattern.﻿ 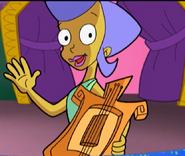 "Out of Sync" Title Card