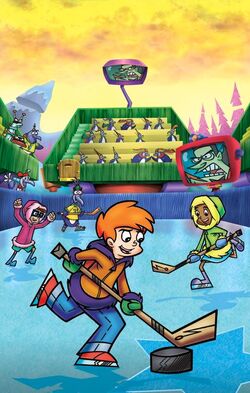 "Penguin Tears" is the third episode of Season 4 of Cyberchase. It originally aired on July 26, 2005.

Hacker’s secret quest continues, with the nefarious ‘borg on the hunt for the next piece of his mysterious machine. His search for the legendary Prism of Penguia takes him to snowy Cyberia. While trying to stop Hacker, Digit and the kids are trapped in an icy cave and must master the principles of bouncing in order to break out. Can they escape in time or will Hacker’s plan succeed?

"Gosh, that really is sad."

"That's how a legend of the crying penguin was born."

"But how'll we do that? We can't even see each other. Besides, there's no aiming point!"