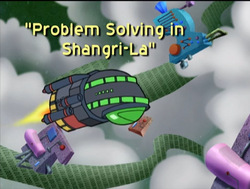 "Problem Solving in Shangri-La" is the 18th episode of the first season of Cyberchase. It originally aired on February 13, 2002.

Hacker is holding the kids captive aboard the Grim Wreaker when a storm forces the Wreaker to land on a snowy mountaintop. They are taken prisoner by a peaceful but mysterious Zen Master, who devises a game of strategy to test their problem-solving skills. The winner of the game will be set free; the loser will remain a prisoner. In the battle of brainpower, the kids discover that each of them has a different way of solving problems and that, despite anger and frustration, they need to be tolerant of these differences. Hacker, of course, has his own way of solving problems. Working together, the kids find a way to defeat Hacker and gain their freedom.