For the fictional version of Archimedes of Syracuse, see Archimedes (historical figure). 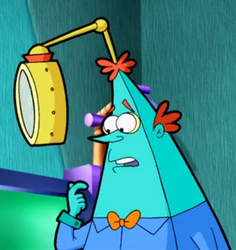 Professor Archimedes is an ally of of Motherboard and the CyberSquad. He debuted in "Eureeka".

Little is known about the history between Marbles and Professor Archimedes although the two seem to have a close working relationship. In "Eureeka", Archimedes has just finished building a replica of Motherboard's Encryptor Chip, but due to fear of Hacker's henchmen retreats into 2-dimensions, accidentally causing the chip to disappear form his possession. He is reference by name in "Clock Like An Egyptian" where Dr. Marbles remarks how the Encryptor Chip is exactly where he'd said it would be.

He later appears in "Starlight Night", having taken on the responsibility of making sure the lights go on. He is then kidnapped by Hacker who is trying to stop the holiday and later rescued by the Cybersquad.

In his first appearance, Professor Archimedes shows a determination to protect the new Encryptor Chip from Hacker, and puts full trust in his two assistants to pull him back into the third dimension.

In "Starlight Night", he's shown to be somewhat socially awkward and mild mannered, although principled and idealistic at the same time. After being kidnapped by Hacker, he makes several attempts to convince him to act for good. Archimedes seems to show more patience with him than either Dr. Marbles or Digit, possibly since he's encountered Hacker on fewer occasions.

The professor is turquoise colored and resembles a pyramid. He has ginger hair at the peak of his head and around his ears as well as ginger eyebrows. There is a magnifying glass handing from the top of his head that is typically at eye level. His facial features resemble Hackers which may imply Marbles was inspired by him during Hacker's creation.