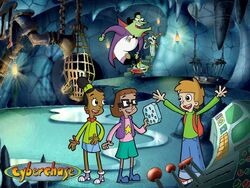 At the end of Act 1, The credits appear at the wrong time

The extra credits were edited out of the archived version.

The error is not present the full episode.