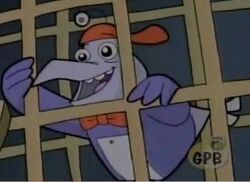 Digit goes to the Cybersite R-Fair City for some fun and decides to try out a new game,not knowing it's a trick devised by Hacker. Taking two numbers from a hat, Didgit multiplies them and ends up with an even number-8. But when he falls into the water, he finds himself locked in a cage!

Landing in the city, the CyberSquad meets a woman named Lucky who explains that the games of R-Fair City are fair despite being games of chance,but there are rumours of an unfair game in the city.

After playing a few games-'Wacky Worms','Pure Chance' and 'Squares',they are no closer to finding Didgit and find all three games to be perfectly fair-Four worms;Three of each picture;etc.Meanwhile Digit escapes from his cage-only to be recaptured by Buzz and Delete.

Later,'Madame Incognita' as Hacker disguised himself as approaches the group and Matt,not knowing the game is a trap,gives it a go. Unfortunatly,Matt gets an even number,too-4-and finds himself imprisoned alongside Digit!

Inez and Jackie use the Squawkpads to uncover the truth behind the game. Five of the six pairs of numbers when multiplied come out even and only one comes out odd!  As Lucky looks for Matt and Digit,the girls give the game a try-but 'Madame Incognita' needs to pick.

Hacker ends up with an even number-12-and has his own trap used against him as he falls into the water.  Lucky shows up with a rescued Matt and Digit and Hacker gives chase.

Thinking the children have played 'Pure Chance',Hacker goes into one of the doors-and is tossed out of R-Fair City by choosing the wrong one.