Razzell is a squid-like kid in Perfectomundo. He is part of the Inventor Scouts, and is probably most famous for inventing the DigiFizz. He is a very smart kid in school. 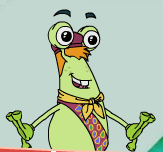 Raz is considered a top Inventor Scout, due to inventing the famous Digi-Fizz. Because of that, he is probably an intelligent kid in his school. In his first appearance, The X-Factor, Raz learned about the Multiplier effect when selling the Digi-Fizz, and when investigating the dome pollution. He works together with the Cybersquad to make Digi-Fizz cans. But there is one secret that is revealed-that Raz puts in propellants to make the sparkles go high.

In The X-Factor, after Hacker opened his soup factory, Perfectamundo was warned of a pollution incident, where orange spots were appearing on the sites dome. Residents blamed Hacker's factory, but when it was shut down, spots were still appearing. At the factory, when Raz was tossing a DigiFizz to Jackie, she dropped it, and orange spots appeared. Jackie concluded that it was the DigiFizz, and after doing the multiplier effect, it was known that because the DigiFizz was so popular, that so many orange spots were appearing on the dome. After the mayor read the information, Raz asked if he could fix the problem, rather than discontinue the DigiFizz. The mayor said yes, as long as Raz could do it under an hour. A look in the DigiFizz revealed that orange propellents were sticking to the dome, and Raz inserted filters into the canisters to block the propellents, and cleaned the dome too, with the help of the other kids in Perfectamundo.

In the Town Square, Raz revealed that he was to blame for the incident. Raz wanted the sparkles to go really high, but at the moment, he did not know about the multiplier effect. The statement was followed by a dome cleaning and a DigiFizz sparkle liftoff.

Retrieved from "https://cyberchase.fandom.com/wiki/Razz?oldid=19813"
Community content is available under CC-BY-SA unless otherwise noted.