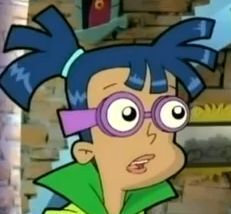 Shari Spotter is a British[citation needed] wizard in training. She and her world seem to be a spoof on the Harry Potter franchise. She becomes very close to Matt, which causes Jackie and Inez to get jealous. Matt remains Shari's friend.

The relationship Matt has with Jackie and Inez seems to be a spoof from the Veronia and Betty comic series. Betty, the good girl that is a nerd, is Archie's (a redhead that is also a detective in the show Archie's Weird Mysteries) girlfriend and is also rivals with Veronia, a rich, snobby, but very beautiful woman that also pursues Archie to be his "real true girlfriend." Inez plays a part as Betty and Jackie is Veronica while Matt is Archie.