Shari Spotter and the Cosmic Crumpets 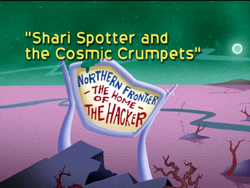 "Shari Spotter and the Cosmic Crumpets" is the eleventh episode of Season 3 of Cyberchase. It originally aired on October 28, 2004.

Shari Spotter, star student of Frogsnorts Sorcerers Academy, is in trouble!  Entrusted with baking the all-powerful Cosmic Crumpets for the annual Sorcerers Ball, she burns the magical treats and must concoct a new batch. But she is stymied because the recipe contains strange, top-heavy fractions. Digit and the kids must help Shari sort out the confusion of the mixed numbers.  But can they do it before Hacker earns a degree in Sorcery from the Wicked Witch and becomes the most powerful sorcerer in Cyberspace?!

Wicked's line "By George, I think he's got it!" is a reference to the musical My Fair Lady.