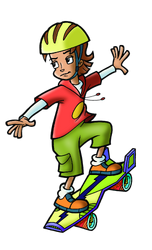 Slider, nicknamed "Sly", is a 13-year-old[2] Radster skateboarder and builder allied with the CyberSquad. He lives in his garage, which also serves as a workshop.

According to the Skwakopedia, Slider "can fix or make anything". He is mainly shown repairing vehicles such as skateboards, bikes[citation needed], and cars[3]. He has also rigged up an electronic personal bank[4] and modified the Syncolator, as well as correctly predicting a malfunction with the latter before using it[1].

Slider first appears in "The Borg of the Ring", and becomes a recurring character from Season 3 onwards. His main goal was to find his long-missing father, Coop, who Hacker had forced into hiding. This is accomplished in the Hacker's Transformatron arc; Slider and Coop reunite in its final episode, "Measure for Measure".

According to Slider, his father Coop had abandoned him when he was younger because Hacker had hunted Coop for many years. However, in the episode "Measure for Measure", he finds out that his father abandoned him to protect him, and to make sure Hacker does not get the Network Interface Card that would allow Hacker to transform into whatever he wishes. If such were to happen, the Hacker could cause immense chaos and even rule cyberspace.

Slider is a serious and cool 13-year-old skateboarder in Radopolis who builds and repairs skateboards and bikes.

Slider has long brown hair, light tan skin, and roughly square-shaped eyes with black pupils. He usually wears a red, short-sleeved hoodie with a golden-yellow oval on the front; a long-sleeved white shirt underneath; moss-green shorts; and orange sneakers with gray laces and gray soles.

Inez is implied to have a crush on Slider. She has called him "cute"[citation needed], and does not brush him off for calling her "Nezzie" on the grounds that "he's… different"[1], implying that she likes him. The fact that he also uses the nickname “Nezzie” like Matt may hint at some feelings towards her back as well.

Jackie is also implied to have a crush on Slider. She finds him "kinda cute" and mentions that he seems to be "the quiet, sensitive type"[5]. When Slider wins the skate-off against Hacker in "Going Solar", Jackie cheers too long and loudly for him, and blushes about it.

Though Slider has had few direct interactions with her throughout the series, he shows concern for Jackie in "Team Spirit", noting that she doesn't like to swim, and attempting to help her up after she twists her ankle, despite Matt's protests. This extra attention to her may imply feelings towards her.

Matt and Slider would often argue, perhaps out of Matt's jealousy (Inez and Jackie both like Slider, but Matt wants them to like HIM), but work together to stop Hacker. They seem to have made peace with each other in "Team Spirit", and haven't been shown arguing since. "Going Solar" depicts them as good friends, and maybe something more.

Cyberteen who lives in Radopolis. Friend of Jackie, Inez, Matt and Digit. Can fix or make anything. His dad, Coop, has been missing for a long time – something to do with Hacker.

Slider's name is probably based on the fact he is a skateboarder, but another possibility is that it's a spoof of the character Strider, aka King Aragorn in Lord of the Rings (the first episode he appears in is called "The Borg of the Ring."

Hacker deliberately mispronounces his name as Slither in "Going Solar."

Slider writes his letters in all caps (except for his i's), as seen in Team Spirit when he tracks the kids' times.