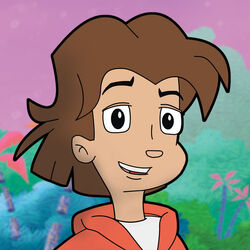 Slider (sometimes "Sly") is a 13-year-old skateboarder and he's a cyborg from Radopolis who builds and fixes skateboards and bikes. He claims that his father had disappeared because Hacker had been hunting him. Slider first appears in "The Borg of the Ring," and helps the cybersquad in several episodes after. It can be said that Jackie and Inez both have a crush on him.

According to the Skwakopeidia on The Quest, Slider lives in his garage, which also serves as his workshop. The Skwakopeidia also mentions that he can build or fix anything.

Slider's name is probably based on the fact he is a skateboarder, but another possibility is that it's a spoof of the character Strider, aka King Aragorn in Lord of the Rings (the first episode he appears in is called "The Borg of the Ring." Hacker deliberately mispronounces his name as Slither in "Going Solar."

Slider has had very few interactions with Jackie throughout the series. However, In the episode "Team Spirit," he becomes worried in her, remarking that Jackie doesn't like to swim and attempts to help her up after she twists her ankle. The way it is said can either be taken as flirting or just friendly concern. Jackie also finds him "cute" and mentions that he seems to be "the strong, silent type." When Slider won the skate-off against Hacker in "Going Solar," Jackie cheered too long, too loudly, blushing about it.

Matt and Slider often argue, but usually agree on things like how to stop Hacker. They seem to have made their peace in "Team Spirit" because neither are seen arguing again. They are shown to be good friends in "Going Solar."

Slider has never mentioned feelings for Inez, but has been heard calling her "Nezzie." Inez doesn't seem to mind, remarking that "he's.....different." Inez has mentioned that he's "cute."

Slider usually appears in a red, short-sleeved hoodie with a long-sleeved white shirt underneath. The hoodie has a golden oval on it. He also wears dull green shorts and orange sneakers with gray laces. His long hair is brown, his skin is light tan, and his eyes are square-shaped with black pupils.

Cyberteen who lives in Radopolis. Friend of Jackie, Inez, Matt and Digit. Can fix or make anything. His dad, Coop, has been missing for a long time – something to do with Hacker.

Add a photo to this gallery
Retrieved from "https://cyberchase.fandom.com/wiki/Slider?oldid=22798"
Community content is available under CC-BY-SA unless otherwise noted.