Snow Day to be Exact 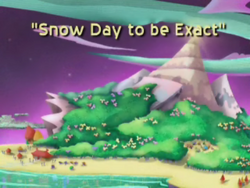 "Snow Day to be Exact" is the fourth episode of Season 1 of Cyberchase. It originally aired on January 24, 2002.

Hacker steals the powerful sunisphere from Solaria, causing the cyberworld’s sunny vacation paradise to be covered in snow! In a fun-filled chase across the snowy terrain, the kids must discover the power and speed of estimation in order to recover the glowing orb from Buzz and Delete before the temperature reaches zero and the site freezes over forever.

In the Cyberchase Online video for Act 3, the audio is slowed down significantly and panned to one side.

The error is present when all 3 separate acts of this episode merge to make the archived copy.[2]

The error is not present in the full episode (Cyberchase Online Version).

Inez in her apartment

The CyberSquad on snowy Solaria

Hacker in the Grim Wreaker

With the tree drawn as background art

With the tree drawn as background art 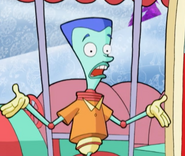 Olli's opposite version of his off-model face

Community content is available under CC-BY-SA unless otherwise noted.