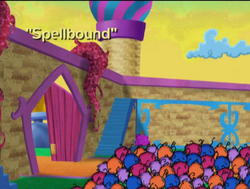 "Spellbound" is the season 7 finale of Cyberchase. It originally aired on October 6, 2009.

When Wicked casts a spell on the Pompadorians to make them all adore her, Jackie and Digit must reproduce the only symbol that can break it – without being able to see what the symbol looks like. Matt and Inez can’t get to Pompadoria to help, so they describe the symbol through their Skwak. But how can they describe the odd-looking spell-breaker accurately so Jackie can make a reproduction that works?