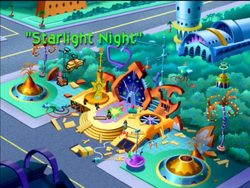 "Starlight Night" is the twelfth and final episode of the third season of Cyberchase. It originally aired on December 31, 2004.

It’s Starlight Night, the annual holiday when all the stars in Cyberspace are refreshed for the new year. But Hacker concocts a scheme to darken the stars of cyberspace forever.  He sends Buzz and Delete to stop all production of the new star circuits and take inventor Archimedes away to the Northern Frontier.  With the ceremony only hours away, the kids and Digit must find a simple way to make the complex circuits and rescue Archimedes – all before Hacker turns out the lights in cyberspace!