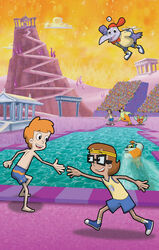 "Team Spirit" is the sixth episode of Season 6 of Cyberchase.

Interest is lagging in the annual Mount Olympus Games, attendance is sagging, and Zeus is not happy. How can he restore the spirit of competition? Simple... With lightning bolt speed, he pits Team Motherboard, coached by Digit, against Team Hacker, coached by Wicked, The teams have to compete in the Triadditon, a relay race made up of an obstacle course, a swim race, and a foot race where each competitor does one event and tags their teammate to do the next. Bragging rights and hero worship go to the winners. But Wicked and Digit have their hands full when Hacker and Matt both insist on running the final event so that they can claim Zeus’s glory. How can the kids convince Matt to let go of his personal pride - and rivalry with Slider who subs for Jackie, who has a twisted ankle—for the good of the team? And Wicked doesn't listen to Hacker, who insists that his arms gave him the best swim time--which he should do--but his "skinny, little things you call legs" gave him the worst running time--which causes his team to lose.