The Bluebird of Zappiness

This article is about the episode. You may be looking for the device of a similar name.
"The Bluebird of Zappiness"
Cyberchase episode
Season 8, episode 5

"The Bluebird of Zappiness" is the fifth episode of Season 8.

Hacker’s nemesis Ledge is back to settle the score with Hacker by finding the Bluebird of Zappiness – the key to fixing Motherboard’s virus – before Hacker can. To stop him, Hacker makes an unlikely alliance – with the CyberSquad!  Together they must figure out how clues from Motherboard – plus shadow math – can help them find it first. Can this unlikely team possibly succeed?

The episode starts with Hacker on top of a building wearing clown makeup. Ledge (the villain from the previous episode) comes out and reveals how he tricked him and takes a picture of him and sends it to the local news, where at the Northern Frontier Buzz and Delete are watching. Them and Hacker get into a brief argument which results in Hacker firing them. When he kicks them out, reporters and Ledge are outside taking pictures. Hacker shooes them all away except for Ledge. He then says that he will find the Bluebird of Zappiness next. That infuriates Hacker, which causes him to run onto his ship and fly off. Buzz and Delete overhear this, and join on Ledge's side to make Hacker really mad. Meanwhile, the Cybersquad are in Poddleville having a birthday party with a girl named Lily. She starts to get sad when everyone has a bigger shadow than her. Digit (inadvertently) says that she's the shortest, making her cry. Inez and Matt explain what Digit meant to say and Jackie figures out a way to make her shadow larger. Somewhere off in Cyberspace, Ledge, Buzz, and Delete arrive at Ledge's secret lair, where he, also like Hacker and Wicked, want to take over Cyberspace. Plus Motherboard makes the Cybersquad work with Hacker on the mission. 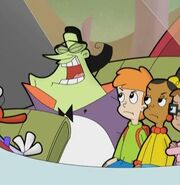