The Borg of the Ring 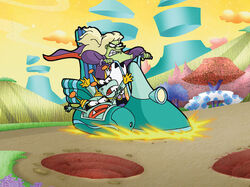 "The Borg of the Ring" is the second episode of the third season of Cyberchase. It originally aired on May 4, 2004.

Hacker uses a long-lost ring to get his heart's desire. He wishes all the wheels in Radopolis to disappear. He then makes himself King of Radopolis. The Cybersquad show up and try to confront Hacker, bur fail, only to have Hacker dump an avalanche of tires on them.

A boy named Slider shows up and digs them out. He prepares to leave when the Cybersquad begs him to help them get back the ring that Hacker used. They ride over to Slider's garage, where he makes alternative skateboards because of the new rule. Jackie and Inez have a crush on Slider, making Matt jealous and untrustworthy and Digit feeling like "chopped liver". The girls argue for a while for who's going with Slider, but Matt immediately declares that Slider, Digit and himself will make an alternate ring and switch the real one with Hacker while the girls go to the forest and make a perfect circle. They all split up. While traveling, Matt tries to show off, but Slider gets the best of him due to the fact that Slider is an experienced skateboarder. Meanwhile, on a beach (which is Hacker's secret hideout), the 3 boys (it's one boy, one cyber-boy, and one cyboid) see Hacker and start devising a plan to switch Hacker's ring. Then, the girls pass a place where the circles they pass sink. We get back to the boys back at Slider's garage with Slider searching for something. He pulls out a blueprint where it shows a ring like the one on Hacker's head. Slider then takes out drawing utensils and draws out the ring. Digit then draws out the details. After he is done, they go to switch the 2 rings. At last, the girls arrive at the Real Circle of Supreme Safety. they read the directions engraved on the purple stone. They freak out because they don't know where the exact center of the circle is.

At Hacker's place, Hacker desires for Motherboard's memories to be erased. As he said, a huge magnet appears and parts of Control Central are being pulled apart. The boys watch as Hacker has cameras watching her. As he enjoys this, he wishes for some popcorn and it appears in front of him. The girls meanwhile try to find the exact center of the circle. Then they come up with an idea that they can use other things to help them. Meanwhile, Hacker is laughs maniacally at his plan then, a photographer (disguised as Digit) distracts Hacker into taking pictures with him. He sets down his ring so it "won't cause a glare in the picture." However, Buzz and Delete (who are mute due to Hacker's desire for them to stop talking) see the trick the kids are pulling and try to alert Hacker while the boys get away with the real ring. A chase ensues between them. At the circle, the girls finally find a way to the exact center of the circle and by the time they are done, the boys arrive with the real ring, but before Inez could put it down in the center, Hacker, Buzz, and Delete appear to try and get it back. Slider then tricks Hacker with a second fake ring and throws the real ring to Matt, who puts it in the center, and soon, all of Hacker’s wishes are undone. and everything goes back to normal as Matt thanks Slider for the help.