"The Creech Who Would Be Crowned"
Cyberchase episode
Season 3, episode 5 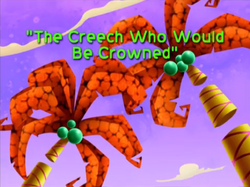 Original air date
May 7, 2004
Directed by
Larry Jacobs
Written by
Adam Rudman
George Arthur Bloom
Kristin Laskas Martin
Topic
Direction and distance
Previous
"A Piece of the Action"
Next
"The Grapes Of Plath"

The Creech Who Would Be Crowned is the fifth episode of the third season of Cyberchase. It originally aired on May 7, 2004.

The CyberSquad is summoned to Tikiville to stop Hacker from winning a race that would allow him to take over the cybersite.  Upon arrival, Matt and Jackie tease Inez about her big vocabulary, so she decides to say just one small word – “Bye!”  She splits from the group and teams up with a Tikiville girl named Creech. Creech considers it her destiny to rule the land her family once ruled for so many years.  Hacker, of course, is out to win any way he can.  The kids have to overcome their differences as well as use their knowledge of direction and distance to help Creech take a shortcut to the finish line…but will they cross it before Hacker?

"The Creech Who Would Be Crowned" Title Card

PBS KIDS - Cyberchase Videos - The Creech Who Would Be Crowned

Retrieved from "https://cyberchase.fandom.com/wiki/The_Creech_Who_Would_Be_Crowned?oldid=26942"
Community content is available under CC-BY-SA unless otherwise noted.