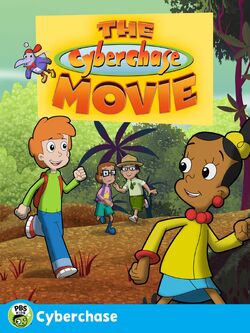 "The Cyberchase Movie" is split into two episodes for Season 9.

Hacker and his bumbling henchbots are drilling inside the nature preserve Ecotopia in search of the Emergency Reset Button, which will allow Hacker to reformat all of Cyberspace…putting him in charge of everyone and everything forever! He accidentally triggers a slime geyser, which destroys many animals' habitats. The CyberSquad teams up with Ollie (guest star Rico Rodriguez), a Junior Ranger, to save the animals and quickly discovers that destroyed habitats aren't their only problem. Can the kids restore Ecotopia and prevent Cyberspace from being lost to Hacker forever?

Retrieved from "https://cyberchase.fandom.com/wiki/The_Cyberchase_Movie?oldid=28598"
Community content is available under CC-BY-SA unless otherwise noted.