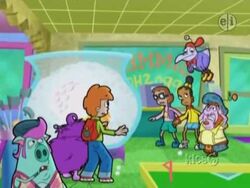 "The Deedle Beast" is the sixth episode of the seventh season of Cyberchase. It originally aired on October 5, 2009.

Digit is pet-sitting in Golftopia, taking care of Dewey, a lovable Deedle Beast.  But suddenly Dewey starts going berserk on his daily walks.  What’s going on?! The kids arrive to help, but how do you figure out what’s wrong with an animal that can’t talk?  The kids begin to see a pattern in the critter’s odd behavior - and the plot thickens when they realize that Hacker has moved in right next door.  What is the King of Chaos up to this time?

Retrieved from "https://cyberchase.fandom.com/wiki/The_Deedle_Beast?oldid=22277"
Community content is available under CC-BY-SA unless otherwise noted.