The Emperor Has Snow Clothes 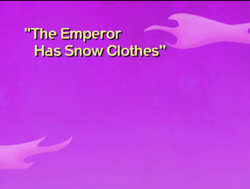 "The Emperor Has Snow Clothes" is the second episode of Season 7, and of the Weather Watchers mini-series.

Hacker has crowned himself Emperor of Penguia and deposited the real emperor as a frozen statue in a distant corner of the site.  The CyberSquad arrives just as a crippling snowstorm makes its way across Penguia in a path that seems destined to collide with their rescue. Digit (who has a cold) uses updates on the storm’s progress from cyberweathercaster Stormy Gale (Janice Huff) to help the kids track the storm.  Will the kids be able to predict where and when it will hit next – or will the storm stop them from saving the Emperor from a frozen fate?

In Penguia, Hacker has frozen Emperor Penguia, placed him in the Frigid Fields, and crowned himself emperor. Except for Fluff and the Cybersquad, nobody is brave enough to save him, as Hacker has vowed to freeze anyone that does so. When the kids (except for Digit, who has a cold) arrive at Fluff's house, he explains that to complete Operation: Save the Emperor, they must travel from Penguin Village to Furgie's Igloo, since Furgie's Meltmeister is needed to help complete the mission. They will then go from there to Frigid Fields where the emperor is. Since its a long distance, Fluff offers them his Super Speedy Snowdeer Sleigh which is really fast. However, due to the fact that it can only hold 3 and that the Emperor needs room, Matt and Jackie go to save the emperor, while Inez stays with Fluff.

Later, Inez and Fluff get word that there is a snowstorm at Snowville. Fluff adds that Snowville is not far away from Penguin Village.

Matt and Jackie get the MeltMeister from Furgie. However, Buzz and Delete are nearby fishing and catch them and tell Hacker what they saw. He asks his servants who lives in the igloo. One says it is nobody important, but another kicks in and says the owner of the igloo is Furgie, who is the best inventor and has an invention to save the Emperor. Hacker, now aware of this, sends Buzz and Delete to stop them from saving the Emperor.

While Fluff is logging in the storm, Inez traces its path. Inez picks up something: the storm is moving in a straight line, and Powder Pass one of the only ways to get to Frigid Fields, stands in the storms path.

After the storm hits Snowville and Penguin Village, it goes on to hit Icebergburg and Wintervale.

Inez and Fluff start to determine how much time Jackie and Matt have until Powder Pass is hit. The storm hit Snowville at 3:00, Penguin Village at 3:15, Iceburg at 3:30, and Wintervale at 3:45. They are getting somewhere since the difference in time was 15 minutes for the storm to get from one town to the next. So they use the scale to measure the distance between each town, which is 5 cybermiles. Since powder Pass is 10 cybermiles from Wintervale instead of five, it will take 30 minutes for the storm to get from Wintervale. It is 4:00 now, which means there will be 15 minutes until the storm hits Powder Pass. Inez and Fluff warn Matt. However, Hacker is onto them and turns the sign to trick them. Hacker is successful and Matt and Jackie wind up in the Ice Forest.

Fluff is aware of this, but knows a shortcut, the Green River should be frozen, so Matt and Jackie should be able to get to the Emperor through the River. However, when they get there, it is not frozen, so Matt and Jackie land the sleigh on an iceburg and use a stick to get them across. They unfreeze the Emperor with the Meltmeister (though they have some difficulties with it when they start using it) and Penguia is safe from Hacker

As a subplot, Buzz and Delete try to become Hacker's second in command (while he is still the Emperor). First Buzz tries catching and frying sturgeon (which he reveals is Hacker's favorite type of fish),while Delete carves an Ice Statue of Hacker. When Hacker knows what the Cybersquad is up to, he sends Buzz and Delete to stop them. The duo try all kinds of plans to stop Matt and Jackie from reaching Frigid Fields, including hurling a giant snowball down a hill, cutting down a bridge (Matt and Jackie get over by getting the deer to jump the bridgeless chasm (Jackie vows to give the deer a treat if he does so), and cutting down a tree to block the sleighs path (Buzz gets hit by the tree when its cut down). Hacker calls himself his own second in command when he turns the sign to Powder Pass, but remains at that same spot for the rest of the episode and is buried by all the snow from the storm. Delete eventually talks Buzz into letting him be second in command.

When Penguia is safe from Hacker, Digit ends up feeling a little better from his cold but ends violently sneezing once more ending the episode, and his soup lands on his head.