The Eye of Rom 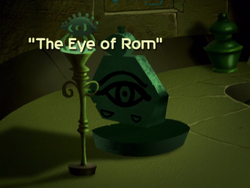 The Eye of Rom is the seventh episode of the second season of Cyberchase. It originally aired on May 14, 2003.

Hacker steals the powerful Eye of Rom from Binky the Cat’s pyramid, placing the Ancient Egypt cybersite in jeopardy. The CyberSquad sets out to retrieve the Eye from Hacker, but the journey is packed with a maze of exciting, action-filled gambits that force them to first do and undo a series of complicated steps.