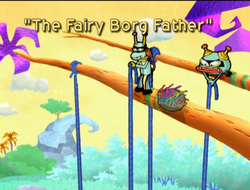 The Fairy Borg Father is the fifth episode of the fifth season of Cyberchase. It originally aired on November 30, 2006.

It is the first episode to feature Phillip Williams as the voice of Buzz after Len Carlson's passing.

Delete is having a bad day. Hacker yelled at him and Buzz made fun of his first-ever invention, a “Bunny-Copter.” When he wishes things were better, Delete discovers he has a Fairy Borg Father named Zanko, who appears and grants him nine wishes. Chaos ensues from Delete’s wacky wishes, and the CyberSquad is called in. When Zanko & Matt end up stuck on a ledge inside hazardous Statico Chasm, Inez and Jackie must ‘refine & optimize’ the Bunny-Copter to rescue them. Can they do it in time?

Motherboard transformed into a bunny

Zanko says "Can't hold on much longer!" while hanging from a ledge. This is the catchphrase and scenario of Cliff Hanger from Between the Lions, a contemporaneous PBS Kids show.