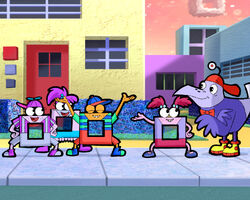 "The Flying Parallinis" is the sixth episode of Season 5 of Cyberchase. It originally aired on April 16, 2007.

When Hacker strands Jackie atop Mount Wayupthere, the rest of the CyberSquad has to act fast to save her. If not they will trade her back for the Network Interface Card and if they do that he can use his transformatron again. In their search for the elusive Diamond Joe - the mysterious figure who holds the secret to Jackie's release - the CyberSquad meets spunky TW, a young Parallini who agrees to help them. Can they discover the power of parallelograms in time to launch a daring rescue mission?