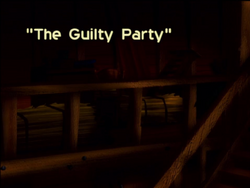 The Guilty Party is the twelfth episode of Season 2 of Cyberchase. It originally aired on September 17, 2003.

Hacker returns to Poddleville with a peace offering: a magnificent statue of the Mayor of Poddleville. But at the unveiling party, Hacker accuses someone of stealing the key to his recharger chair. The accused claims he’s innocent. Like Sherlock Holmes and Dr. Watson, the kids and Digit investigate the crime by interviewing eyewitnesses and recreating the crime scene. But the more they investigate, the more the accused is placed at the scene of the crime. Everyone saw him. It appears that Hacker has found the culprit. But has he? And what’s that strange noise coming from inside the statue?

Inez, having taken her glasses off

The end of the episode