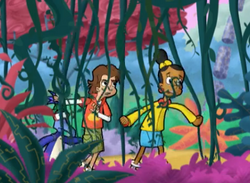 "The Hacker's Challenge" is the first episode of Season 8 and the Cyberchase Summer Challenge.

To prove once and for all that he’s smarter than the CyberSquad, Hacker challenges the kids and their friends to solve a series of puzzles. But this isn’t just fun and games – the fate of cybersite Solaria hangs in the balance. Solve all the puzzles in under three hours, and Solaria is saved… but fail, and the favorite vacation spot will be reformatted into digital garbage!

A reunion with the cybersquad and their friends is interrupted by Hacker, who demonstrates his invention the Reconfiguratron, which can turn anything into cybercode and he threatens to use it on Solaria and turn it into cybercode. He offers them a challenge to solve a set of puzzles in three hours or he will turn Solaria into binary. The Cybersquad accepts and at Solaria, Buzz and Delete give them gizmos that will help them during the challenge and confiscate their skwakpads (teams aren't allowed to talk to other teams during the challenge). Then, the teams set out to solve their puzzles.

Purple Team's (Inez, Jules, and Creech) puzzle involves them entering the Grotto of Sunken Skulls and solving riddles told to them by the stone master. However, they meet Troglobytes on the way. However, they are able to get them to move by asking them politely and they go through. However, they get trapped and find the Sedimentary Sentry and it tells them to solve the puzzle. The number the stone master is thinking of is less than 10. That number is also a multiple of 3, when that number is subtracted by 4, they will get a number that is divisible by 5. Jules writes the clues down. They get only two guesses. They identify the numbers that are less than 10 and multiples of 3. The possible numbers are 3, 6, and 9. Jules guesses 6, which is wrong. This leaves the team with only one more guess. They are only left with 3 and 9. Inez asks about the other clues. Jules says that when the number is subtracted by 4 they will get a number that is divisible by 5. Creech says it's not 3 because 3 - 4 = -1. Jules says it's not 6, because they already said that. This leaves 9 as the only right answer. Inez tests it with a bunch of stones. 9 - 4 = 5 and 5 / 5 = 1. 9 meets all three requirements and they say 9 is the mystery number. 9 is indeed the correct answer and the Sedimentary Sentry lets the kids go.