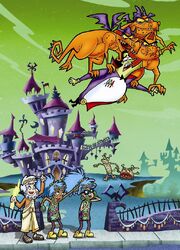 "The Halloween Howl" is the first episode of the fifth season of Cyberchase. It originally aired on October 31, 2006.

The annual "Halloween Howl" bash in Castleblanca promises to be spooktacular… until Hacker takes over the Mayor's Castle and brings its seven stone gargoyles to life. Obeying Hacker's every command, the gargoyles capture the Mayor and imprison him in the dungeon. To gain control of the creepy creatures, the CyberSquad must figure out how to use division to evenly split up bunches of garlic and rock candy. But can they do it in time to rescue the Mayor and save The Halloween Howl? Meanwhile Inez and Jackie are having a problem with their friendship after a misunderstanding.