For information on the original version of the episode, see The Poddleville Case (pilot). 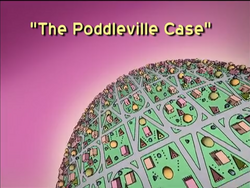 "The Poddleville Case" is the seventh episode of Season 1 of Cyberchase. It is an edit of the show's original pilot episode. As a result, the style of the animation and music differs from other episodes.

The diabolical Hacker wreaks havoc when he steals the power pods of Poddleville, a cybercity filled with patterns. Jackie, Matt and Inez must use math and logic to crack the double pattern in the Podlock that unlocks the Poddles’ cyberpower vault before Hacker and his henchmen do!