For the final version of the episode, see The Poddleville Case.

“i don't think it's a secret most tv shows make pilot episodes that never see broadcast. It's a standard thing. They make a sample, if it's perfect, it goes on air. They wanted to tweak a few things, so they made a second episode and started with that one instead.”
―Gino Patti[2]

"The Poddleville Case" is the original pilot episode of Cyberchase, produced by Thirteen/WNET in partnership with Curious Pictures, and scored by Peter Lurye[3]. It was distributed to schools for a formative evaluation on May 23, 1999[4]. The episode was given a promo on August 3, 1999, and aired on September 27, 1999, and again on March 24, 2000 after Nelvana took over production. The episode was redubbed, rescripted, and digitally edited to be used in the final series.

On May 20, 2018, Gino Patti, a clean-up artist and ancillary character designer for the episode, uploaded footage of a 1999 VHS to Instagram[2]. The Cyberchase Facebook page uploaded a demo video for the original pilot on January 21, 2019[1].

The full episode was considered lost media until a copy was found in the archives of a Maryland university library. A digitization was shared on February 6, 2021[5].

The series logo went through several changes. The earliest version was used in the demo video[6] and on the WNET website[7], and appears to use the same font as the Ice Age logo. The VHS version uses the same font as the final series, but is beveled and filled with various textures. Only the final version is known to include the ellipse behind the text.

Overall, the episode is redubbed and slightly rewritten, with some scenes being cut, and others using different music. The Poddles' eggs were renamed to pods.

Jackie is shown to live in an apartment instead of a house. She is shown preparing breakfast with eggs, when a beige box computer in the kitchen shakes and opens a portal. The portal looks like an indigo and purple whirlpool vortex tornado, rather than a flat, pink, oval-shaped surface as in the final episode and series. Jackie clings to the countertop, but is sucked into the portal, which recedes into the computer.

The inside of the vortex was completely reanimated. The original version has a more static camera, hand-drawn objects, and a background that resembles the early portal. Objects found within the vortex include a yellow

; what appear to be computer components; an hourglass, multiple dice, a protractor, and a scale ruler; and some items with dubious mathematical relevance, namely a pizza slice, satellite dish, and sock. The final vortex scene is over twice as long. The scene where Inez, Jackie, and Matt exit the portal was also reanimated.

Motherboard's design is much more abstract: She is two floating eyes with blue sclera and green irises, and a sine wave representing her mouth. In the final episode, her design was updated and the images she shows were changed.

The final version of the episode applies a hue shift to the establishing shot of the Grim Wreaker, changing all of the yellows to reds.

An exchange between Hacker, Buzz, and Delete aboard the Grim Wreaker was scrapped. Some dialogue from this scene was revealed in the demo video. In the final version, a spotlight filter was also added to the Grim Wreaker scenes.

The scene with the Mayor of Poddleville was also rewritten.

The scenes of Hacker, Buzz, and Delete flying away have a different aerial view of Poddleville and use different music.

At the end of the episode, Jackie decides to eat cereal instead of an egg[3], which is not mentioned in the final episode.

Other potential edits in the final version of the episode include color grading and chroma keying. The opening shot of Poddleville and the pattern on the Skwak Pad are thought to have been given new computer-generated imagery. Some scenes were completely reanimated.[8]

The final episode's Cyberchase For Real segment, starring Kareem, is widely believed to originate from a pilot version of "The Poddleville Case". However, no live-action segment is mentioned in the 1999 evaluation, and the VHS's runtime of 24:15:00 is noted to be too short to also include the For Real segment.[3] 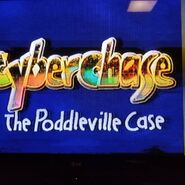 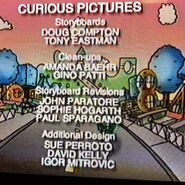 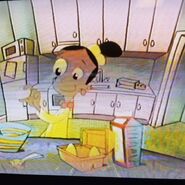 Jackie making breakfast in her apartment 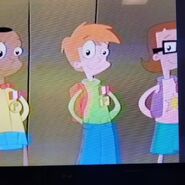 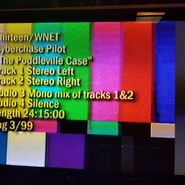 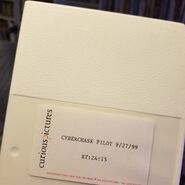