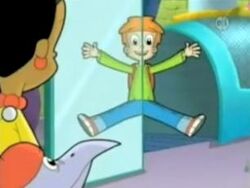 Original air date
February 1, 2002
Directed by
Larry Jacobs
Written by
George Arthur Bloom
Kristin Laskas Martin
Topic
Symmetry
Previous
Clock Like an Egyptian
Next
A Day at the Spa
The Secrets of Symmetria is the tenth episode of the first season of Cyberchase. It originally aired on February 1, 2002. It is based on a story by Noel MacNeal.

Retrieved from "https://cyberchase.fandom.com/wiki/The_Secrets_of_Symmetria?oldid=23303"
Community content is available under CC-BY-SA unless otherwise noted.