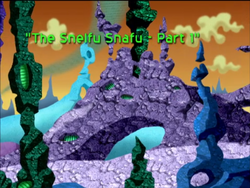 The Snelfu Snafu: Part 1 is the ninth episode of the third season of Cyberchase. It originally aired on October 13, 2004.

The long lost encryptor chip, the only computer component that can restore Motherboard to full power, unexpectedly appears on the popular cyberauction U-WANT, U-BID!  To make matters worse, Hacker is the top bidder – and if he gets it, Motherboard is doomed! The CyberSquad and their friend Slider get jobs in Cyberspace, and figure out how much they need to save per day to outbid Hacker.  They succeed in winning the auction, but are totally unprepared for what happens when they install the chip in Motherboard…Hacker takes over Cyberspace!!! To be continued...

Jackie's assembly-line job at a chocolate factory may be a reference to the I Love Lucy episode "Job Switching", in which a conveyor belt similarly speeds up beyond the employees' ability to package the chocolates.