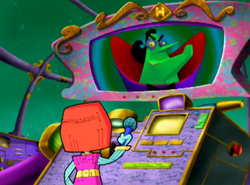 The Snelfu Snafu: Part 2 is the tenth episode of Season 3 of Cyberchase. It originally aired on October 14, 2004.

It’s the CyberSquad’s biggest challenge ever - Hacker is in complete control of Cyberspace!  Jackie, Matt, Inez and Digit must find a way to bring Motherboard back to power and oust Hacker.  Slider’s “Syncolator” invention is the answer…but some of the pieces are missing.  With limited funds, the kids must go to various cybersites and purchase the necessary parts, wheeling and dealing with the nefarious owners, learning to spend their money wisely in the process.  If they run out of money before the Syncolator can be fixed, Hacker will toss Motherboard’s last hope for recovery into a black hole where it will be lost forever.

Following the previous episode, Hacker has gained control of Cyberspace. To find the chip, the Cybersquad and Slider have to find parts for a tracking device. They have to buy them with Digit's big allowance from Hacker. Meanwhile, Hacker is planning to throw the encryptor chip containing Motherboard into the black hole while Wicked began spending huge amounts of money they collected from Cyberspace for decorations and herself. Hacker tries to toss the chip in a black hole, but can't pay for its disposal. The Cybersquad have all the parts they need, and realize the tracker can't be used again, so Slider won't be able to find his dad if he finds the chip. Slider uses the tracker to find the chip and catch up Hacker, who tries to dump it in a volcano. Digit catches the chip, and Doctor Marbles tries to put it into Motherboard, but isn't able to. The only way to make it work, he says, will destroy the chip in the process. They must do it, and when they do, Motherboard comes back on. The episode ends with Slider disappearing from Control Central, perhaps, as Inez states, to search for his father. Motherboard calls "three cheers for that brave young cyborg."