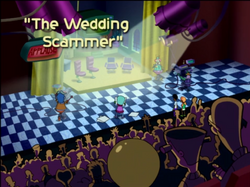 The Wedding Scammer is the eleventh episode of the second season of Cyberchase. It originally aired on September 16, 2003.

Believing that the Wicked Witch is really the long lost daughter of a powerful king, Hacker agrees to marry her, convinced that their union will double his power, and Motherboard will never be able to defeat him. What Hacker doesn’t know is that Wicked has secretly hidden away the REAL long-lost daughter of the king and stolen her identity. The kids must think their way through an intricate series of puzzles to free the real daughter. Will they succeed and get back to the wedding before Hacker and Wicked say “I do”? 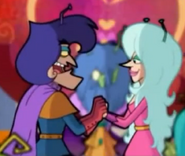