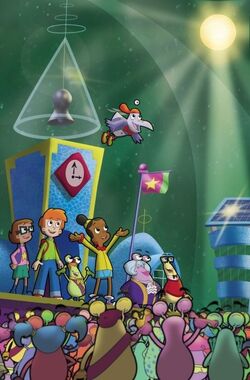 "The X-Factor" is Episode 703. It is the third episode of Weather Watchers.

All is not well in Perfectamundo, a dome-enclosed cybersite, when orange spots are discovered building up on the dome’s interior surface, blocking the site’s precious sunlight. What source could be responsible for the spots multiplying so fast? Is it Hacker’s new factory that pours out orange clouds through smoky stacks? It can’t be that new Digifizz toy, with its tiny burst of colorful sparkles shooting into the air each time it gets used. With time running out, the CyberSquad must come to grips with the power of multiplication and use it to undo the site’s pollution problem.

In Perfectamundo, a site that relies on the sun's energy to power their solar panels, Hacker claims he wants to open up a soup factory. He gets a permit, but some disdain is showed from Waldo, one of the permit supervisors. Meanwhile, Raz and Digit have become business partners and are selling a toy called the DigiFizz, which sends up sparkles everytime you "Rock it, and unlock it". The product is initially successful, and Digit vowes to give out free samples all day.

The Mayor and her assistant Waldo are checking out the dome for anything, and it seems perfect until orange spots start to appear. They try to clean the spots off, but more appear.

At the DigiFizz factory, Raz gets a call from his school as well as all the other schools that their students want DigiFizz. Knowing that each class has 20 students, that there are 17 classes or 340 students in each school, and that there are 6 schools, they come to 2040 cans of DigiFizz. Suddenly, they hear an announcement from the Mayor that orange spots are appearing on the dome. The conclusion is that the orange "stuff" that is coming out of Hackers factory is causing the orange spots, so the Mayor, Waldo, Matt, and Inez go to shut down the factory. However, even after its shut down, spots continue to appear on the dome, therefore proving that Hacker is not responsible. As the emergency gets worse, Perfectamundo starts to go on a downturn.

Meanwhile, Jackie and Raz deliver cans of DigiFizz to the schools of Perfectamundo. After making their delivery, they start to investigate what is causing the orange spots on the dome to appear. However, when Raz throws a can of DigiFizz to Jackie, she drops it, causing the can to fall and the lid to open and the sparkles to shoot up onto the ceiling. When orange spots appear, Jackie and Digit conclude that the DigiFizz is the cause, but this upsets Raz and causes him to run out of the factory crying.

Back at Hackers factory, Hacker reveals his plan: to make soup out of ultra-vicious plants and feed a flora which will become vicious and help Hacker in his quest to dominate Cyberspace. Matt and Inez discover this plan and try to put a stop to it.

At the DigiFizz factory, Raz, Digit, and Jackie try to find out how much orange spots 2040 cans of DigiFizz could produce. First Jackie and Digit test if DigiFizz produces orange spots. When they "Rock it, and unlock it", 6 more spots are produced, and they create a table to find out how much trouble perfectamundo is in. After writing down that 1 can produces 3 spots, they learn that the 20 cans for the 20 students in each class produce 60 spots, that 340 cans produce 1020 spots, and ultimately, that 2040 cans produce 6120 spots, which Raz says is enough to gunk up the entire dome.

At Hackers factory, Matt and Inez discover a way to stop Hackers plan: put ultra vivacious plants in Hackers soup to change the mood of the flora while Hacker and his henchmen visit Mary Contrary.

Meanwhile, the Mayor and Waldo find out about the DigiFizz, and order Raz to stop DigiFizz production and recall all canisters. Raz vows to fix it in one hour and discovers whats causing the spots, the propellant that is in a canister is sticking to the dome. So he puts in a filter that will allow the sparkles to travel, but keep the propellant in the canister. It works, but he still has to get the filters in the canisters in one hour. At the same time, he also wants to help the Mayor and Waldo clean the mess on the dome. So with the help of his Inventor Scout friends, Raz makes filters for the DigiFizz canisters while Matt and Inez put ultra-vivacious plants in Hackers soup.

Later in Town Square, Raz admits his mistake for putting the propellents in the DigiFizz. Then, all the kids in Perfectamundo, which he gave the filters to, help clean the dome entirely. Due to a large number of kids participating in the effort, the multiplier effect adds up, and later the entire dome is cleaned. Everyone celebrates with DigiFizz.

At Hacker's factory, Hacker expects Flora to be mean but she ends up licking her, despite Hacker telling her to let him go.