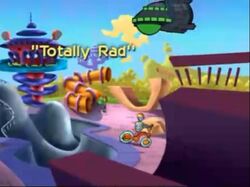 "Totally Rad" is the second episode of the second season of Cyberchase. It first aired on March 31, 2003.

Hacker takes over the Radopolis cybersite, declaring himself King. To dethrone him, the kids challenge Hacker’s hired hands to an Olympic-like skateboard competition. There’s just one catch: high-scoring tricks need as much area as possible and the configuration of the field’s perimeter mysteriously keeps changing! With Digit as coach, the kids put on a dazzling display of skateboarding skills, but can they match their performance to the changing arena?

Hacker and his gang arrived at Radopolis, a cybersite known for skating. Hacker then took the crown from the ruler, King Dudicus, and declared Radopolis to be a no-skating area.

Meanwhile, back at earth, Matt has completed the new pen for his pig. But it was found that the area in it is too small and there are no more fence pieces. Motherboard then appeared in the barn's window and reported the situation in Radopolis.

The Cybersquad arrived there on skateboard and were going to return the crown to King Dudicus. The decision who is to be king will be based on a skate-off. If the Cybersquad wins, Hacker leaves and the crown return to its rightful owner. But if Hacker wins, he keeps the crown and the kids can never come back to Cyberspace. The kids prepare in a practice skating course with Digit as their coach. Matt will be riding a skateboard, Jackie is on bike, and Inez will be rollerblading.

The skate-off soon came with Olli as the announcer and the three Fate Sisters as judges. The Cybersquad will be representing Motherboard. Much to their horror, the opponents weren't Buzz and Delete. Instead, they were three of Radopolis's top and mean skaters named Rim, Edge, and Brink. As the competition started, Team Hacker was leading with Cybersquad having difficulty, due to the amount of area inside the rink. And the leading team can change the area as long as the number of fence pieces are twenty-six. By the last round, the Cybersquad measured the areas they skated in. For Inez to win, she'll have to skate small, otherwise, she'll be forced to become Hacker's cheerleader. Inez managed to get her team ahead by one point, which means they get to determine the area's size. Hacker's last challenger, Rim gained zero points, because it was quite tight in there. Team Motherboard won 20 to 19, and King Dudicus is king again.

Back at earth, Matt created a wider fence with the same number of fence pieces.