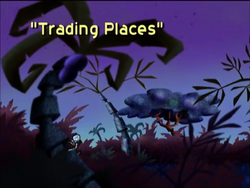 "Trading Places" is the 20th episode of the first season of Cyberchase. It originally aired on July 2, 2002.

While attempting to rescue Dr. Marbles, the kids and Digit crash land on cybersite Nowhere, along with Hacker, Buzz and Delete. As a result of the crash, Hacker is shrunk, and Buzz and Delete become smart. In a race to rebuild their cybercraft and save Marbles, Digit and the kids learn to trade and barter and eventually create a monetary system. But who will finish first?!