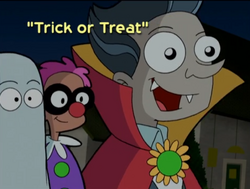 "Trick or Treat" is the fourteenth and final episode of the second season of Cyberchase. It originally aired on October 31, 2003.

Hacker shows up at Motherboard Control Central. He pleads guilty to being the King of Chaos, but says he’s sorry. He doesn’t want to be the bad guy anymore. But when nobody’s looking, he slips a strange frog into the air duct. What happens when this frog grows into a grotesque, alien creature that threatens to destroy Motherboard?  And what will happen to the kids when they go inside Motherboard to track it down?

"Trick or Treat" Title Card
Add a photo to this gallery

Retrieved from "https://cyberchase.fandom.com/wiki/Trick_or_Treat?oldid=26640"
Community content is available under CC-BY-SA unless otherwise noted.