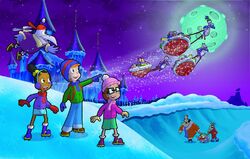 "When Penguins Fly" is the second episode of Season 6 of Cyberchase. It originally aired on December 12, 2007.

The episode's title is an alteration of the idiom "when pigs fly".

Penguins can’t fly - or can they? In Cyberspace, on one special night each year, the penguins of Penguia take a flight to deliver gifts to young borgs across the virtual universe. For the first time ever, the CyberSquad’s friend Fluff is participating and invites his pals Matt, Jackie, Inez, and Digit to join him in the impressive Penguin March.  They head to the Ice Palace, where the gifts are made and where magic snowflakes are sprinkled on the penguins so they can fly. But Hacker, up to his usual ruinous tricks, doesn’t want a happy holiday (let alone happy little borgs) so he creates a giant ditch in front of the Ice Palace and traps all the penguins in its icy depths! The CyberSquad must get the penguins ice-shoes so they can climb out before midnight, but how many do they need? With too many to count, the answer lies in the kids’ ability to sample the penguin population to make a close estimate. Can the CyberSquad save the penguins and their favorite holiday too??

There it is the Ice Palace

This article is a stub.
Please help expand it.
Community content is available under CC-BY-SA unless otherwise noted.
Advertisement