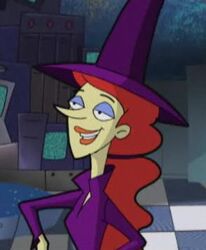 Wicked, often referred to as the Wicked Witch[3][4][5][6][7][8][9][10] and nicknamed Wicky[11][12], Wickie[13], or Witchie[14], is a major recurring antagonist of Cyberchase. Debuting in "And They Counted Happily Ever After", she is a witch who lives in Happily Ever After and seeks to take over Cyberspace. As she mentions stealing Cyber Scout cookies to decorate her gingerbread house, she may be the witch from Hansel and Gretel[3], although she is later shown to live in a castle[15].

The head professor of Hex University[2], Wicked is adept at flying brooms and using magic. She has altered others' memories[3], size[16], personality[6], and species[2][9]. She can also create objects[17]. Wicked variably casts spells with and without rhyming incantations. Some episodes suggest that she needs her wand to use magic[3], while others have her cast spells without holding one[16] and with her hands. In "Designing Mr. Perfect", Wicked's wand is anthropomorphized as Wanda.

Many of Wicked's appearances are characterized by her interaction with Hacker. At first, she pursues a romantic partnership with him; this gives way to rivalry as Hacker repeatedly upsets her or vice versa. Wicked acts alone as the main villain of episodes like "The Case of the Missing Memory" and "A Broom of One's Own".

Wicked is voiced by Linda Ballantyne.

Wicked has light, yellowish skin, long wavy red hair, and a pointy nose. She appears to use lipstick and blue eyeshadow. Her main outfit is a purple witch's hat and dress with a red belt.

In her debut, "And They Counted Happily Ever After," however, she was not shown with eyebrows[18].

Unlike other characters, Wicked's outer ear canal is drawn with one line instead of two intersecting ones in some episodes. This detail changed alongside the animation style in Season 6.

Wicked highly values being smart and acting for herself[19], and dislikes failure[1]. When she feels that she has been mistreated or hasn't gotten her way, she is quick-tempered and outspoken. The provocation ranges from reasonable to petty. She often switches between allying with other characters and working alone, based on her own interest. In some cases, Wicked has helped the CyberSquad to get revenge on Hacker[20], or undone her damage when she is in a good mood[3]. She does not seem to be afraid of Hacker, often defying his wishes and angrily countering any insults.

Wicked is good at manipulating others when she is above suspicion. In her first visit with Hacker, she is able to coax him into joining her by flattering and backhandedly insulting him[3]. She tries a similar tactic in her meeting with Motherboard, which may have been meant to create the opening for the Memory Integrator's theft[8]. She feigns friendliness to trick others into thinking she has changed her evil ways when she needs to use them for her plans[9][17]. Wicked is also able to see through attempts to make her jealous[21].

One of Wicked's main motivators appears to be finding a romantic partner. She tells Hacker that "every ruler has a partner" and expects to be his[22]. However, much like Hacker, Wicked ultimately wants power more than a relationship, and she is willing to outdo him to rule Cyberspace for herself when provoked.

Sometimes, Wicked acts as a genuine and loyal romantic with high moral standards for her suitor. While on Finding Mr. Perfect, she rebukes the bachelors and demands appreciation instead of shallow and cutesy love. In other instances, she seeks to exploit romance for power. Wicked's main desires in a love interest are someone who will make her look good, help her make others miserable, and always agree with her.[19]

Wicked is concerned with beauty and fashion, particularly big hats[1]. This and her unwillingness to disclose her age make her seem somewhat vain and superficial[1]. Wicked also enjoys extravagant remodeling and decorating. These interests sometimes get in the way of villainous plans and motivate poor financial judgment. In "The Snelfu Snafu: Part 2", Hacker breaks up with her after she frivolously spends most of Hacker's 10 million Snelfus on expensive clothes and accessories (except 15 that Buzz has and 3 Delete that have), preventing him from paying an important fee so they can dispose of Motherboard.

In "Model Behavior", Wicked expresses interest in a career as an operatic singer.

Wicked initially tries to become Hacker's partner, calling him "Hackie-poo" or simply "Hackie" as pet names. They were partners from "The Snelfu Snafu, Part 1" to Part 2, when he dumped her after she spent most of his 10 million Snelfus on expensive decors. After reluctantly hiring or even courting Wicked several times, Hacker always jilts, betrays, or otherwise self-centeredly upsets her. In return, she either casts a spell on him or wrecks his evil-doing plans.