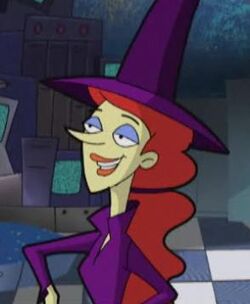 Wicked is a villain who appears in many adventures, and has a desire to take over Cyberspace just as much as Hacker. She is a witch who lives in Happily Ever After and often tries to convince Hacker to become her partner. Hacker has several times reluctantly hired or even courted her, but always jilts her or makes her upset. In return, she either casts a spell on him or wrecks his evil-doing plans. She is voiced by Linda Ballantyne.

Wicked is very stylish, girly, sometimes overly-dramatic, and can be considered to be vain. She usually has a quick temper when she doesn't get her way or what she wants. She likes to be attractive and fashionable, spend money on rich clothes and accessories, and advertise products that she created to usually get people to love her, and have her rule cyberspace. She would also act sweet and friendly when she wants others to think she has changed her evil ways, but eventually everyone learns what she's really up to.

In episode 309, The Snelfu Snafu Part 1, she told him that "every ruler has a partner" when she explains that if he wants to take over Cyberspace, he has to have one. Sometimes when he refuses, she will try to out-do Hacker's plans to change his mind, or prove to him that she deserves to be the ruler more than he does. She has even helped with the kids to stop plans when he upsetted her, such as in episode 310, The Snelfu Snafu Part 2.

In episode 503, Designing Mr. Perfect, she claimed that she doesn't need love but wants appreciation. She wanted to take a perfect frog and turn it into her mate. Without her seeing him, the "frog" she received was actually Digit, and she transformed him into what she wanted. Hacker soon became jealous, thinking that no one is more perfect than him, but only Wicked finds out who her "Mr. Perfect" really was until the end of the episode.

She once dated a "Prince Charming" in episode 501, Halloween Howl, and in the same episode, she shows that she doesn't get jealous when she sees another person with Hacker.

Add a photo to this gallery
Retrieved from "https://cyberchase.fandom.com/wiki/Wicked_Witch?oldid=22808"
Community content is available under CC-BY-SA unless otherwise noted.